Adverse drug events in the ICU – do they happen and do they matter? 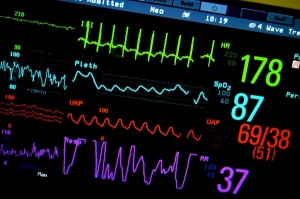 With all the talk lately about early mobilization in the ICU (a recent systematic review, Amy Pawlik’s standing room only presentation at CSM 2012), it’s evident that physical therapists and other rehabilitation professionals are only going to be more involved in critical care in the coming years. This is a challenging practice environment where an understanding of all the medical issues involved is a requirement for sound clinical decision making. Obviously, this includes your patient’s medications. Well, you say, my patient is in an ICU so the MDs and nurses must be looking really closely at this issue, right? That may be, but in spite of the frequent oversight of a team of healthcare providers, including pharmacists, there is evidence that the potential for adverse drug events is high in this environment.

One Error for Every Five Doses

In a study published in Critical Care Medicine back in 2006, investigators used a direct observation method to look for errors and adverse drug events during 4 4-day periods in a medical intensive care unit in a tertiary care academic medical center in Arizona.1 The observers, pharmacy residents specializing in critical care pharmacy practice, recorded information related to the entire medication administration process, from the writing of the prescription to the actual administration. The study detected 132 significant preventable errors or adverse drug events associated with 645 medication doses. In other words, in this study period, in this ICU, one error was made for every 5 doses of medication administered! The most common errors (23%) were those of omission. The wrong dose of the right drug (20%), prescribing, dispensing or administering the wrong drug (16%), using the wrong technique (15%), though the authors don’t make it clear what this really means, and missing potential drug-drug interactions (10%) made up the majority of these errors.

So, do medication errors happen? Looks like it, and in some pretty obvious ways – omission, wrong drug, and wrong dose being the most common types of errors (69%). Now, to be fair to the parties involved, these errors can occur throughout the process, from prescription to dispensing to administration, so it’s not just the physicians or just the nurses or just the pharmacists. And many of these errors are related to potential adverse events  – it’s not that patients are actually not getting drugs they should, being given incorrect doses, or being given incorrect drugs. Perhaps an incorrect dose is ordered by the physician, but the nurse or pharmacist catches that error and the patient is gets the correct drug at the correct dose.

Are there particular medications that are involved in these errors more frequently than others? Not really – the troublemakers are tough to pin down. The largest proportion of medications involved in adverse drug events was “other” (22%). Not helpful. Cardiovascular drugs (17%), antimicrobials (15%), and sedatives and analgesics (14%) were the only others in double digits.

The study was really more about the process of medication delivery, and where in the process errors were occurring, so we don’t have much to go on in terms of clinical outcomes and the adverse drug effects that these errors caused or could have caused. But, the authors were kind enough to provide examples of different kinds of errors, from which you should be able to extrapolate plausible clinical consequences:

In this study, unnoticed drug-drug interactions (DDIs) accounted for a relatively small proportion of errors leading to actual or potential adverse drug events. More recently, a study published in the June issue of The International Journal of Pharmacy Practice evaluated the frequency, severity, and drug combinations involved in DDIs in a medical intensive care unit in Pennsylvania.2 As in the study by Kopp et al, the objective here was not to track clinical outcomes, so we can’t say much about what to look for, just that we should be looking. These authors also used direct observation, evaluating 247 patient drug  profiles via 2 interaction databases over a 4 week period. The observers identified 457 DDIs, at a rate of nearly 2 per patient. Antihypertensives and anticoagulant/antiplatelet agents were most commonly involved in these interactions. About a quarter of the interactions were classified as major in at least one of the databases.

We’re not provided with any information as to how many of these interactions resulted in  any sort of clinical consequence, and just as with the errors, certainly most of them do not. Why or how do these interactions slip by? It’s always important to recognize that it’s not necessarily negligence or lack of knowledge. It may be simply that the drug’s benefit to the patient outweighs the risk of the interaction.

Does this mean you need to input all of your patient’s medications into an interaction database and assume every order has some kind of mistake in it? No, but as they say, just because you’re paranoid doesn’t mean they’re not out to get you. As in every other setting, awareness of the potential for adverse drug events, whether they are the result of a DDI or an error in the process of medication delivery, is critical. Pun totally intended, by the way. Rehabilitation professionals practice somewhat more independently in an outpatient setting, and it makes sense that we should keep a close eye on medications. In critical care, we are far more likely to be part of a pretty effective team, one in which everyone’s role is fairly well defined. It’s at least one team member’s role to know what’s going one with medications and it’s not the PT or OT. But, as we can see in these 2 publications, mistakes slip by. We can also see that when they do, drugs that we should be familiar with (know your antihypertensives and take blood pressure, people!) are involved. We don’t have the pharmacologic knowledge of a physician or a nurse, but if something doesn’t make sense to you, it could be because it doesn’t make sense. Look at the medications. Speak up. Ask questions. You’ll make better decisions for your patients. That’s the object of all of this, isn’t it?

References (Back to text)